Some of my music from “Pictures of Life” CD from 2014:     https://soundcloud.com/search?q=stefan%20nicholson 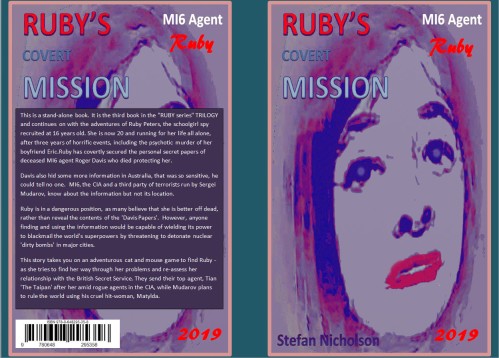 This is a stand-alone book published in July 2019.

It is the THIRD book in the “RUBY series” (but not the last) and continues on with the adventures of Ruby Peters, the schoolgirl spy recruited at 16 years old. She is now 20 and running for her life all alone, after three years of horrific events, including the psychotic murder of her boyfriend Eric.Ruby has covertly secured the personal secret papers of deceased MI6 agent Roger Davis who died protecting her.

Davis also hid some more information in Australia, that was so sensitive, he could tell no one.  MI6, the CIA and a third party of terrorists run by Sergei Mudarov, know about the information but not its location.

Ruby is in a dangerous position, as many believe that she is better off dead, rather than reveal the contents of the ‘Davis Papers’.  However, anyone finding and using the information would be capable of wielding its power to blackmail the world’s superpowers by threatening to detonate nuclear ‘dirty bombs’ in major cities.

This story takes you on an adventurous cat and mouse game to find Ruby – as she tries to find her way through her problems and re-assess her relationship with the British Secret Service. They send their top agent, Tian ‘The Taipan’ after her, amid rogue agents in the CIA, while Mudarov plans to rule the world using his cruel hit-woman, Matylda.

“RUBY IV- The Alliance” is well on the way, with an estimated completion of MAY 2020.

DIAMOND for a RUBY

This is a stand-alone spy-thriller book for the adolescent fiction market that follows on from “SPY within a RUBY”. Ruby Peters is in great danger, fighting off double-agents entrenched in MI6 who recruit mercenaries and a psychotic madman to kill her. Roger Davis speaks from the grave, as his coded messages lead Ruby and Eric to the list that everyone is determined to obtain – at any cost. An absolutely idea packed story with fast-paced action at every step of the novel. Many of Ruby’s friends are injured and killed as a result of her involvement with Davis and as she is betrayed by her own people. Ruby graduates after completing the CCP final project that will have you thinking about your own life and its values.

Eric the ‘nerd’ and Ruby the ‘world hater’ from the village of Dogbol in England have just finished school and get recruited by agent Roger Davis to send him information on two hotel guests (who happen to be Russian and Chinese spies negotiating to buy classified defence secrets from the Cigar Club (elite, titled rogues with Whitehall connections). Things rapidly get out of hand as the story line follows an abduction, killings, multiple agency operations and a group of disbanded foreign legionnaires. A boat gets blown to bits in Liverpool and other boats fight it out off the coast to recover diamonds. Eric and Ruby fend off many challenges trying to survive with the help of some foreign agents. Justice comes at a high price for all involved and people’s lives are changed during their ordeals. 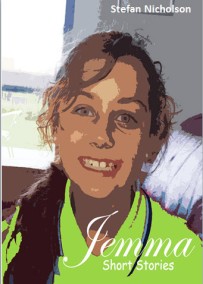 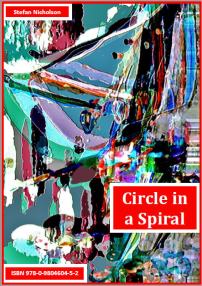 CIRCLE in a Spiral is my latest novel. Sarah Robinson is created to fight the ‘Tri-axial Forces of the Universe’ to save the human race from extermination by Life/Death Algorithms and a corrupt Universe Sentinel.                 NEW at November 2017.

I have decided to put my original comedy routines on Amazon Kindle in the hope that stand-up comedians and theatrical groups can make them work. They were all written in 2017 after I met a funny author who constantly made any comment in a funny voice.

Of course a lot of these routines are heavily dependent on the visuals and how the lines are delivered.  These comedy routines are designed for the novice to present at interviews, gigs and hopefully some TV or stage work – leading to more professional work.